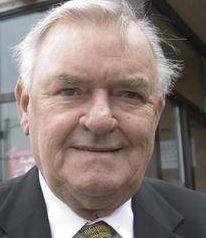 A $7.5-millon sexual-assault lawsuit against the billionaire co-founder of Tim Hortons, Ron Joyce, will go to trial…. but a lawyer for Joyce says he’s appealing the ruling.

In her statement of claim, the woman in her mid-30s, alleges Joyce sexually assaulted her at his Burlington home about 5 years ago. The two had known each other for a decade and at one point had an intimate relationship.

In late 2011 Joyce sent a $50,000 cheque to her lawyer, which he argues was the result of an amicable settlement over the alleged assault. After that the 2 continued on with a platonic relationship. The woman argued the cheque was reimbursement for her legal fees.

In the ruling, superior court justice Paul Perell  struck down the woman’s defamation claim against Joyce, but said an enormous amount of irrelevant evidence was hypocritical, intemperate, and rude. The judge went on to say: “apart from concluding that both Mr. Joyce and the woman are vulpine and cunning — for the purposes of deciding this summary judgment motion, I need not decide who was the hunter or who was the fox.”