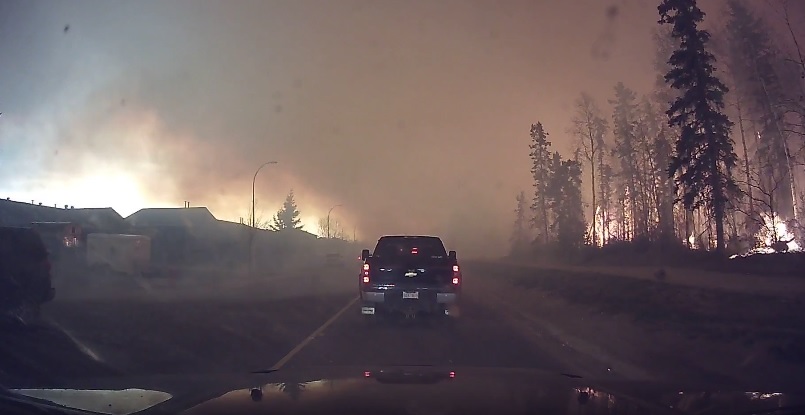 Alberta has expanded an evacuation order around Fort McMurray and declared a provincial state of emergency as damaging wildfires continue to burn through the city and surrounding area.

The mandatory evacuation order was expanded late last night to include the communities of Anzac, Gregoire Lake Estates and Fort McMurray First Nation, which lie approximately 50 kilometres south of Fort McMurray. RCMP officers went door-to-door around 11 p.m., to make sure everyone got out of the affected communities.  At this time, an estimated 1,600 structures have been burned and more than 80,000 residents forced from their homes ahead of the flames, which are expected to continue burning into the weekend.

Evacuees have fled along the two main routes running north and south of the city, to take shelter at oil worker camps and in communities like Lac La Biche and Edmonton. Some oilsands operations have been shut down to accommodate the them. Fuel is becoming scarce on the routes out of Fort McMurray, as evacuees inch away from the city in long lineups on the highway. Most gas stations are limiting customers to a maximum of 50 litres of fuel, and there are reports of four-hour waits to fuel up. Food is also becoming scarce.

Some evacuees who were moved to the community of Anzac were forced to pick up and move on Wednesday night, when the province expanded its evacuation order.

About 225 firefighters are working with heavy equipment and air support to battle the flames, which are nearing Fort McMurray’s airport.