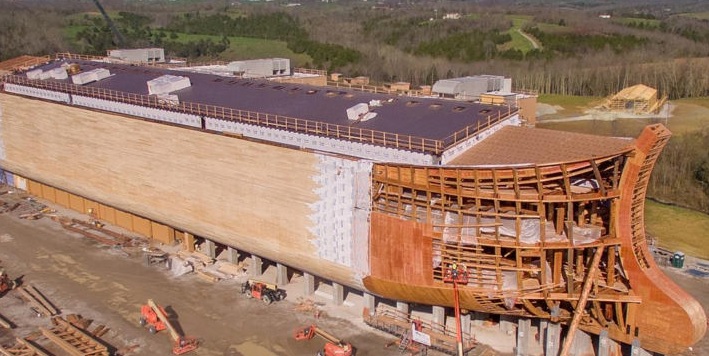 A Noah’s Ark  re-creation has been built in Kentucky by Christians according to the biblical scale (510 feet long) and will be open to the public starting Thursday.  “I believe this is going to be one of the greatest Christian outreaches of this era in history,” said Ken Ham, president of Answers in Genesis, the ministry that built the ark.

The ark is based on the biblical story of Noah who got an end-of-the-world warning from God about a massive flood.  It is intended to stand as proof that the stories of the Bible are true. “People are going to come from all over the world,” Ham said to thousands of people in front of the ark.

Inside the ark are museum-style exhibits: displays of Noah’s family along with rows of cages containing animal replicas, including dinosaurs.The group believes that God created everything about 6,000 years ago – man, dinosaur and everything else – so dinosaurs still would’ve been around at the time of Noah’s flood. Scientists say dinosaurs died out about 65 million years before man appeared.  Here is some drone footage of the ark in construction:

Millions of people first learned about plans for the ark during a debate on evolution between TV’s Bill Nye “the Science Guy” and Ham in early 2014. Nye, a high-profile science advocate and former TV personality, debated Ham on evolution and drew a huge online audience.  The result? Bill Nye’s agreeing to debate Ham seems to have helped turn the tide of years of slow  fundraising for the arc project in Kentucky.  Here is the COMPLETE DEBATE HERE:

About three weeks after the debate, Ham announced that a bond offering from the city of Williamstown had raised $62 million for the project, and a few months later Answers in Genesis was breaking ground at the site of the ark. Adding to this, a federal judge ruled the ark could receive a Kentucky sales tax incentive worth up to $18 million which had opponents of the boat wondering how/why this was allowed.

The court ruled in January that Kentucky officials could not impose requirements on the ark that were not applied to other applicants for the tax incentive, which rebates a portion of the sales tax collected by the ark. That cleared the way for the group to seek out only Christians to fill its labour force. New applicants will be required to sign a statement saying they’re Christian and “profess Christ as their saviour.”

What do you think? Would you tour the ark?

Next post Ways to Look Really Confident (EVEN IF YOU'RE NOT)