GOT A STORY?
Local BuzzUncategorized 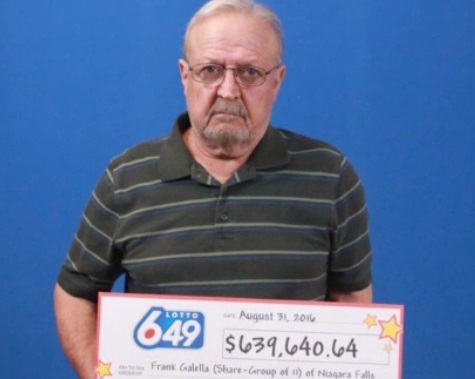 Frank Galella was silent as he left court after a judge called him a cheat and a fraud. The retired Niagara Falls city worker will serve 2 years under house arrest as part of his sentence. Galella was part of a group of 11 people who routinely met at a Tim Horton’s on Dorchester road in Niagara Falls. They would pool their money to play the lottery and according to the agreed statement of facts, it was Galella who was responsible for buying and checking the tickets.

Pictured Below Galella (in sunglasses) leaving the St. Catharines Courthouse In July 2013 Galella realized he had hit the jackpot, but rather than notify the group, he asked his daughter to claim the winning ticket as her own.  Several group members grew suspicious and contacted the Ontario Lottery and Gaming Corporation. His daughter, Joanna Galella was also facing charges but those were dropped.

The OLG paid out 10 of the lottery group winners their share. Galella is still entitled to his share of the winnings regardless of the situation.  He picked up his cheque last week but about half of it will be used to pay down the $325 000 fine ordered by the courts.