Falling in Love with a “Difficult” Cat 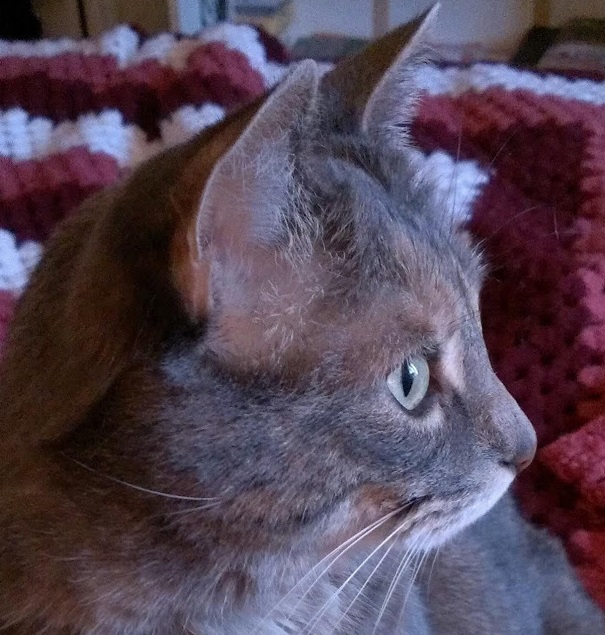 All adoptions have a story. Missy’s adoption story began long before we knew her. The humane society knew nothing about her except that she was approximately 7 years old when she was dropped at the shelter to be spayed. One can only imagine what she was doing before that… probably having litters of kittens, over and over again, possibly under someone’s porch or in a shed. (Missy featured in main picture).

I first saw her in a pet food store. She was up for adoption through the local Humane Society, along with several other cats. All the cages had colourful writing with wax crayons: “Adopt Bernie! 2 years old and will fall asleep in your lap!” and “Lila will keep you busy with her antics!”

Missy’s message was simple and to the point: “Missy is a spayed female, 8 year old.” I looked at her, curled in a corner, eyes wide. She was beautiful but dishevelled, her fur in spiky, greasy clumps on her back. She had the colouring of a muted Tortoiseshell and the stripes of a Tabby. I later learned that this is what’s known as a Torbie – a combo of each. She looked at me from the corner of her eyes and by this I mean, did not turn her head towards me but never took her eyes off of me. She kind of reminded me of Clint Eastwood in one of those old spaghetti westerns.

We’d been thinking about getting a companion for our black beauty Bette, a six year old rescue we adopted after our beloved fifteen year old cat Tess died last year.

We went back and forth, trying to decide if we should bring another cat into the family. When I first saw Missy, we’d still not made a decision. The pet food store was next to a grocery store where I shopped and every time, I’d drop by to see the cats. One by one, the others were adopted. Finally, only Missy was left.

Our story may have ended there. Some have suggested it “should have.” Because, you see, Missy was “difficult.” She nipped and scratched and cowered. Because of that, nobody wanted her. But my husband and I had a tugging at our hearts.

Missy came home with us on January 15, 2016. If you’d asked me how it was going two weeks later, I’d have told you, through tears, that it was very, very “difficult” indeed. I so desperately wanted to love Missy but with each bloody rip at my skin (whether by tooth or claw) I was wondering if we’d made a horrible mistake. She was hissy at Bette, who is a love bug. It broke my heart and we wondered if having Missy was harming Bette?

What to do? The thing is, cats are not ill-fitting garments that you take back to the store for a refund. She was a living being that we invited into our home. We had to make this work!

I called the shelter and our vet for advice. Both said, “Give it time.” Not what I wanted to hear. But that’s exactly what we did.

As I write this, it is early autumn, 2016, nine months after bringing her home. Missy and Bette are upstairs, not curled together, but content with the other on the same bed. Every night, both cats come to our bed and Missy falls asleep on my lap as Bette curls beside one of us. Missy is very talkative and has become the voice for both cats. When treats are wanted, Missy meows and rubs against our legs and Bette waits quietly. They chase each other up and down the stairs. We’d originally had two of everything but they both used the same litterbox and feeding station so they now share. Not friends, but allies. Life is pretty good for our little family of four!

So, why am I telling you about Missy? Because, it’s so easy to choose a fluffy, adorable kitten. Certainly, they need homes and if your heart is set on a wee one, please adopt!

It’s not so easy to choose the “difficult to adopt” older cat who comes with some emotional baggage. They need homes, too! I’m here to tell you that it is SO worth it, if you have the desire and patience!

Oh, and by the way, Missy just came downstairs and jumped on the back of the couch. I went up to her and she lifted her face to me – and indication that she wants a kiss. So, we touched noses. Nothing better!

The Niagara Falls Humane Society has several mature cats carrying a little extra baggage. If you’re thinking about adding a feline family member, please consider them! They are waiting for you and the love they give back is extra special because they’re extra appreciative of you!

(Pictured below: Yukon Cornelius, a white 6 plus year old cat looking for a new home)  For more information CLICK HERE (Pictured below, Dallas, an 8 plus year old cat looking for a new couch to curl up on)  For more information CLICK HERE Fore more information on all animals up for adoption please visit: www.nfhs.ca