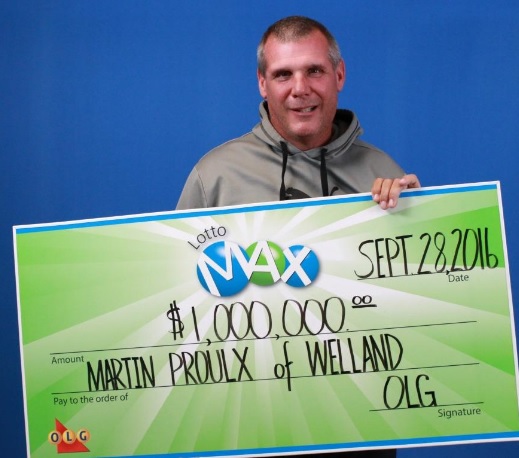 A Welland man is a million bucks richer!!  Congrats to Martin Proulx of Welland who won $1 million with LOTTO MAX MAXMILLIONS in the September 9, 2016 draw.

The winning ticket was purchase by his mom as a gift for his 50th birthday!   Proulx said that when he realized he had won by scanning the ticket in a checker he didn’t want to make a scene so he drove back home and called his wife with the news. She was stunned and didn’t believe him until they later went to verify the ticket together as a winner.

What will he do with the cash?  Proulx said: “I lead a very simple life. I love my job and this win has given me the freedom to do whatever I want. I am probably going to buy a car for my wife and my parents. I will also finally cross the ocean on a family vacation. I don’t know if this win has totally sunk in yet. I haven’t really thought about anything else to do but I know that I will be enjoying my life to the fullest even more now.”

The winning ticket was purchased at CNIB Walmart on Primeway Drive in Welland.