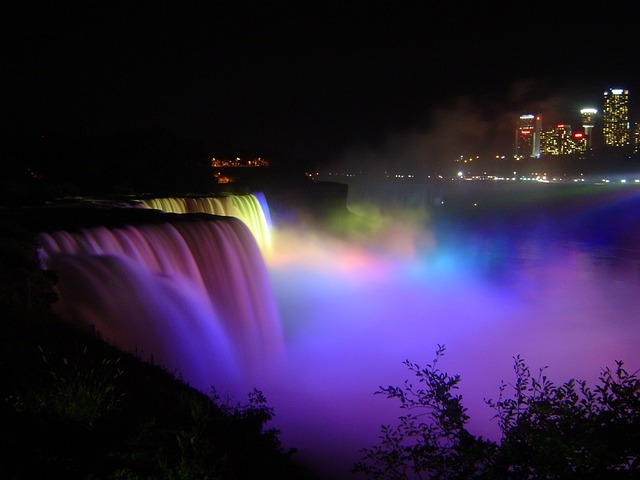 The Niagara Parks Commission (NPC) and its New Year’s Eve event partners have an exciting roster of musical talent that has been assembled for this year’s FREE New Year’s concert in Queen Victoria Park. On December 31st, ring in 2017 with local band, James Blonde, set to start the evening off at 8 p.m. to entertain and rock in the New Year.

The Niagara Falls New Year’s concert in Queen Victoria Park (QVP) draws approximately 50,000 people to the Park, and this year is expected to be no different, so come out and celebrate with us and enjoy two spectacular fireworks displays planned for 9:00 p.m. and midnight that evening.

New Year’s Eve is one of Niagara Falls’ busiest and best nights of the year! It is exciting to see the whole city coming alive, as Niagara provides more to do than anywhere else in Canada on this special night. Visitors and residents alike should come on down and enjoy the entire tourism district in full swing – from great music in Queen Victoria Park to family fun at Clifton Hill’s World Famous Street, to the high-energy gaming at the Niagara Casinos; as well as enjoy the many restaurants and spectacular hotel getaways, Niagara is the place to be on New Year’s Eve.

Serena Ryder: Ryder first gained national recognition with her ballad “Weak in the Knees” in 2007. She is a Toronto-born accomplished songwriter and musician, who possesses a three-octave vocal range and is considered a mezzo-soprano. Her timbre has been described as slightly nasal with a raspy lower register. She has received four prestigious Juno Awards that include: 2008 New Artist of The Year, 2009 Adult Alternative Album of The Year (Is It O.K.), 2010 Video of The Year (Little Bit of Red) and 2013 Adult Alternative Album of The Year. In her MuchMusic Video Award debut last month, Ryder was nominated for three awards, and took home the trophy for Rock / Alternative Video of The Year and went on to perform a stellar live medley of her two hits, “What I Wouldn’t Do” & “Stompa”.

High Valley: Recently declared by Rolling Stone as a Country Artist You Need To Know, High Valley continues to catch the attention of critics, being named “Artist To Watch” by Taste of Country, CMT, Spotify and Pandora. With more than 6.6 million streams, the lead single “Make You Mine,” named “Country Song of the Summer” by Billboard, has already sold more than 150k downloads worldwide as it races toward the top 20 and climbing on the country radio charts. High Valley is currently on the road with Martina McBride on her “Love Unleashed Tour” through December. They have back to back wins as Group or Duo at the Canadian Country Music Association Awards, seven Top 10 hit singles, three gold record certifications, and two JUNO award nominations.

Additional Event Details
Please note no alcohol is permitted on-site and as always, dress appropriately for all outdoor events. A variety of food and beverage vendors will be available, you won’t have to go far for refreshments during this spectacular celebration. And with our outdoor licensed area, everything you need is right here! As always, the presence of security and policing will be on-site to ensure everyone’s safety throughout the night.

The Winter Festival of Lights strives to offer events like the New Year’s Eve Concert Extravaganza at no charge to the public however it does cost a considerable amount of money to host these great shows so we appreciate the donations made by those attending the New Year’s Eve Party. Look for their Donation Barrels placed within Queen Victoria Park and feel good knowing that your contribution helps.

Directions/Parking
The best parking lot that is close to not only the concert in the park, both casinos (Casino Niagara and Fallsview Casino), Fallsview Blvd. and all the main Clifton Hill attractions, is just off Robinson Street. If you enter the parking lot from the back, you will fare much better in getting in quickly. We also have a new added entrance on Victoria Avenue, for 3 ways in and 3 ways out! Below, you will find a map of this lot. It is large and extends from Clifton Hill all the way to the Skylon Tower. You should have no problem finding a parking spot here, and the price to park will be much cheaper than along the Niagara Parkway, which will actually be closed down in sections.

Previous post LEAN ON ME - New Year New You?