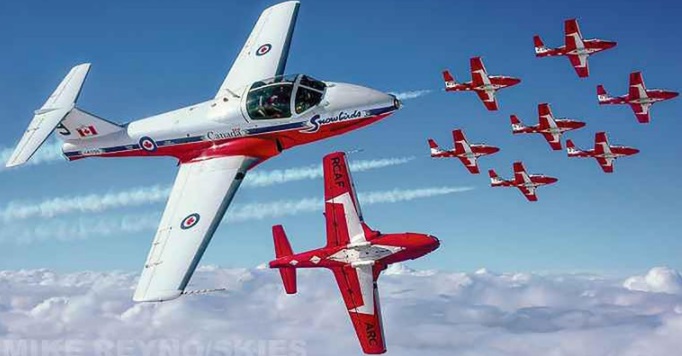 If you are a fan of the airshow that the Canadian Snowbirds put on, you are in luck. They are coming to the Niagara District Airport in Niagara-on-the-Lake Wednesday, Sept. 20.

It’s part of the Canada 150 celebrations .  Gates will open at the airport at 2 p.m., and there will be aircraft on display for viewing as well. Airport manager James Smith, says some of the displays include: two T28 Trojans, Second World War fighters; a Second World War Harvair Trainer Yellow Bird; two planes owned by a local air enthusiast, 1930-era Lockhart 10 used in the filming of an Amelia Earhart movie and a Waco 1930s biplane; and an Aero L-29 Delfin military jet trainer aircraft used by the air forces of Warsaw Pact nations.

Also on display will be the aircraft used by the Civil Air Rescue Emergency Service volunteers out of the Niagara District Airport, and the local Air Cadets tow plane and glider.

The Snowbirds are expected to begin their show at 4:30 p.m. for a 45-minute performance. There will be a food truck on the grounds, and vendors with Snowbird memorabilia.

General admission tickets are $5, with the field in front of the airport being used for parking.

There is also a VIP event, which includes preferred parking at the airport, a licensed viewing area and an opportunity to meet the Snowbirds pilots.

For tickets go to www.eventbrite.com/e/meet-the-snowbirds-in-niagara-on-the-lake-tickets-36871498645