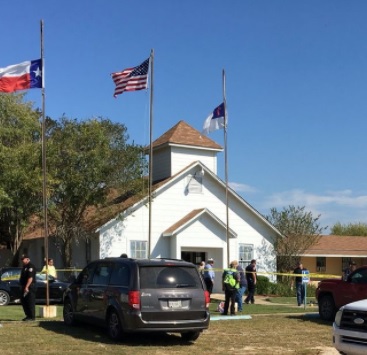 In a terrifying trend that seems to have no end in sight, another mass shooting (the worst in Texas) has taken place at  a church service being held yesterday.

Law enforcement officers say a man in his 20’s entered the First Baptist Church of Sutherland Springsman dressed in black tactical-style gear and armed with an assault rifle and then opened fire, killing 26 people and wounding about 20 others in what the governor called the deadliest mass shooting in the state’s history.

What is reported at this time is that the shooter then left the scene to get into his car only to be confronted by an armed resident, a neighbour to the church who saw what was going on and “grabbed his rifle and engaged the suspect.

It was then that driver , Johnnie Langendorff passed by, slowed down when he saw what was going on and then gave the armed resident a ride to chase the shooter who had made a getaway in his car. (Langendorff pictured below) “The neighbor with the rifle came to my truck and he opened my door and said, ‘He just shot up the church,’ and got in,” Langendorff said today on “Good Morning America.” “He said, ‘Chase him’ so that’s what I did. I just chased him.”

At the same time, Langendorff was on the phone with 911 dispatchers trying to alert police as to what was going on.

The situation ended with the chased suspect eventually crashed his car as the two men pursued him.  Police said the suspect was found dead in his vehicle. Authorities have not yet determined whether the suspect died from a self-inflicted gunshot wound or from a shot by Langendorff’s passenger.
The gunman has been identified as 26-year-old Devin Patrick Kelley. The U.S. official said Kelley lived in a San Antonio suburb and didn’t appear to be linked to organized terrorist groups. Investigators were looking at social media posts Kelley made in the days before Sunday’s attack, including one that appeared to show an AR-15 semiautomatic weapon.

U.S. President Donald Trump, who was in Japan, called the shooting an “act of evil” and said he was monitoring the situation.

Next post SHORTER DAYS AND LONGER NIGHTS - How To Make the MOST of Them!