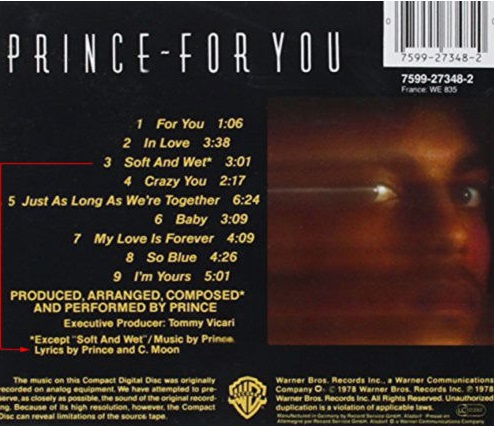 OK, so co-owning one of his lesser-known songs might not turn out to be a great investment….but hey, it’s Prince who knows?!

So just to give this story some context, in 1978, Chris Moon co-wrote the lyrics to “Soft and Wet,” the first single off For You, Prince’s debut album. Now Moon is selling his stake in the song on eBay for a Buy It Now price of $490,000.

What do you get for half a mil? Unfortunately, you don’t get songwriting credit. Future releases won’t be credited as “‘Music by Prince; Lyrics by Prince and (you.)”

Bummer, I know… but then again, you will receive future songwriting royalties, any revenues from song or album purchases, any streaming revenue, and any future earnings, like if the song is used in a movie or TV show, or used in a commercial…

Sound like an interesting plan?  Well, even Moon himself says to purchase it may not be the best idea if you are thinking about dollars and cents.  Moon said in fact that “Anyone who buys this probably shouldn’t be doing it for financial purposes, it’s more about owning one of the most unique collectibles ever related to Prince.” Hmm. So let’s look at the pros and cons.

On the upside, you do get to say you own a piece of a Prince song. Since Prince rarely shared songwriting credit, that would put you in exclusive company.

On the other hand, you also get to say that you made a massive investment you are extremely unlikely to ever recoup — much less profit from.

But on the other other hand, your investment could turn out like Todd McFarlane’s $3 million purchase of Mark McGwire’s then-record breaking 70th home run ball. McFarlane credits his baseball collection with opening doors that helped him land exclusive action figure deals with all four major American sports.

“The McGwire ball bought me some meetings,” McFarlane says. “People tend to equate money with success: ‘Hey, that guy spent $3 million for a baseball! Bring him in!’ … I could have spent the money on a couple of Super Bowl commercials, but you think anybody would still be asking about them years later?”

Next post FAMILY DAY 2018 - STUFF TO DO IN NIAGARA