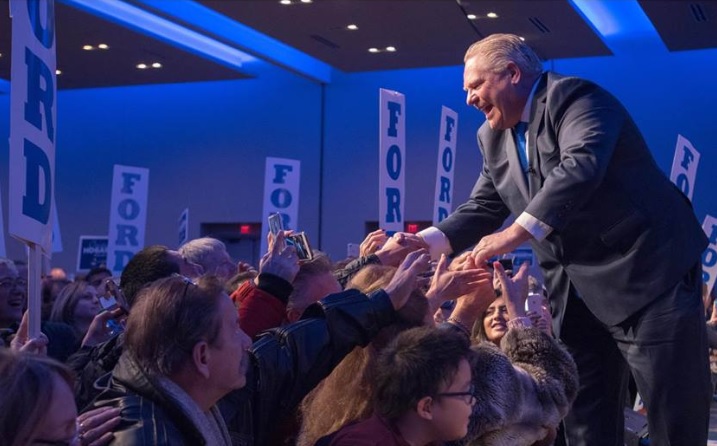 This is the first time the PCs will form government in Ontario since 2003, with leader Doug Ford expected to be sworn in as premier in the coming weeks.

Now that he has won, let’s take a trip down memory lane to see what promises his campaign was built on.

The PCs released  “A plan for Ontario,” The plan included a wide variety of promises, from a pledge to reduce hydro bills by 12 per cent to reducing income tax and reforming education.

Here are some top takeaways as highlighted on the party’s website:

PUT MORE MONEY IN YOUR POCKET
Scrap the carbon tax, reduce gas prices by 10 cents per litre, and give real tax relief to lower and middle class families.
CLEAN UP THE HYDRO MESS
Fire the $6 million man running Hydro One and lower your hydro bills by 12%.
CREATE GOOD JOBS
Send the message that Ontario is ‘Open for Business’ and bring quality jobs back to Ontario by lowering taxes, stabilizing hydro bills and cutting job-killing red tape.
RESTORE ACCOUNTABILITY AND TRUST
Order a line-by-line audit of government spending to bring an end to the culture of waste and mismanagement in government.
CUT HOSPITAL WAIT TIMES
End hallway health care by creating 15,000 new long-term care beds over the next 5 years and adding $3.8 billion in new support for mental health, addictions and housing.

The PC’s have promised to deliver two-way, all-day GO service, including expansions to Bowmanville, Kitchener and completing the Niagara GO Expansion, and support regional transit projects in places such as Ottawa, Hamilton, Mississauga/Brampton, Kitchener-Waterloo and London.

To see the full “Plan for the People” visit the website on this link.