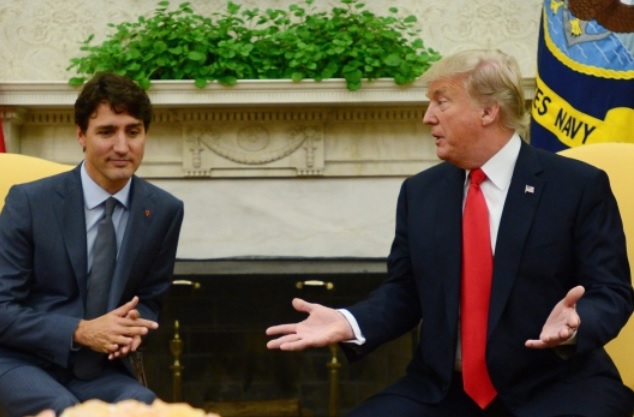 Trudeau’s closing comments indicated that Canada “will not be pushed around” when it comes to the Trump administration’s tariffs on steel and aluminum and Trump said those words will end up costing Canadians “a lot of money.”

The President further went on in a Twitter tirade to indicate that our PM is “dishonest” and “weak.”

Trump has consistently railed against what he claims are unfair trade practices by some of America’s biggest trade partners, including Canada.

One particular source of his angst recently has been Canada’s supply management system, which levels tariffs of up to 300 per cent on imported dairy products.

On the other side of the coin when it comes to the summit, many reports indicate it was Trump who was out of line and isolated himself from the proceedings with actions like this.  He:

-Disrupted a meeting on women’s empowerment by arriving late

-Left the summit early before planned meetings on climate change

-Announced he would not honour the G7’s collective communique he’d signed hours earlier.

Trump gave a news conference in Singapore with his comments on Tuesday following his historic summit with North Korean leader Kim Jong Un.
About G7 or Group of 7

The Group of Seven (G7) is a group consisting of Canada, France, Germany, Italy, Japan, the United Kingdom, and the United States. These countries, with the seven largest advanced economies in the world, represent more than 62% of the global net wealth ($280 trillion).

Since 1975, the group meets annually on summit site to discuss economic policies.