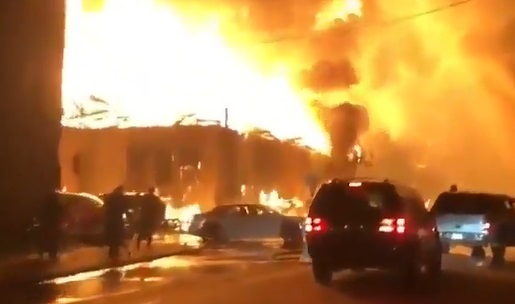 Violence continues to escalate in Minneapolis with a torching of a police station over the death of George Floyd, a handcuffed black man who pleaded for air as a white police officer kneeled on his neck.

Protesters reportedly were cheering as the fires blazed on the now evacuated 3rd Precinct station, the focus of many of the protests.  The 3rd Precinct covers the portion of south Minneapolis where Floyd was arrested.

A police spokesman confirmed late Thursday that staff had evacuated the station, “in the interest of the safety of our personnel” shortly after 10 p.m.

Minneapolis Mayor Jacob Frey (below), made his first public appearance of the night at City Hall near 2 a.m. Friday and took responsibility for evacuating the precinct, saying it had become too dangerous for officers there. He also defended the city’s lack of engagement with looters — only a handful of arrests across the first two nights of violence — and said, “We are doing absolutely everything that we can to keep the peace.” He said National Guard members were being stationed in locations to help stem looting, including banks, grocery stores and pharmacies.

The mayor also called Wednesday for criminal charges against the white police officer seen on video kneeling on Floyd.  Based on the video, Mayor Jacob Frey said officer Derek Chauvin should be charged in the death of George Floyd.

“I can’t stand back & watch this happen to a great American City, Minneapolis. A total lack of leadership,” Trump tweeted.

“Either the very weak Radical Left Mayor, Jacob Frey, get his act together and bring the City under control, or I will send in the National Guard & get the job done right.”

Minneapolis Mayor Jacob Frey lashed back  at President Trump’s remarks saying: “Weakness is refusing to take responsibility for your own actions. Weakness is pointing your finger at somebody else during a time of crisis.

Donald Trump knows nothing about the strength of Minneapolis. We are strong as hell. Is this a difficult time period? Yes. But you better be damn sure that we’re going to get through this.”

It’s also reported now that on Friday morning, the Minnesota State Patrol arrested a CNN television crew as they reported on the unrest in Minneapolis. While live on air, a CNN reporter, producer and a photojournalist  were led away in handcuffs.

Protests first erupted Tuesday, a day after Floyd’s death in a confrontation with police captured on widely seen citizen video. On the video, Floyd can be seen pleading as Officer Derek Chauvin presses his knee against him. As minutes pass, Floyd slowly stops talking and moving.