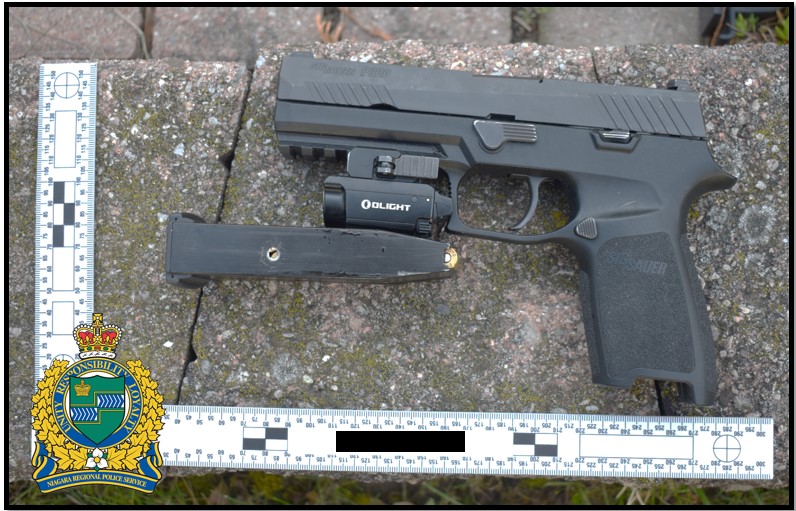 Niagara Regional Police say what initially was a response to a motor vehicle crash early Saturday morning in St. Catharines, led to the discovery of a loaded firearm and charges being laid.

On Saturday May 8, 2021 at 6:24 a.m, police  were called by members of the public regarding a motor vehicle collision at Meredith Drive near Rendale Avenue and found a 2007 grey Honda Civic that had collided with an unoccupied parked Toyota Tundra.

The Honda Civic had three occupants at the time of the collision. They were all treated at the scene by Niagara Emergency Medical Services paramedics and subsequently transported to a local hospital.

A loaded firearm was located hidden by a nearby residence in close proximity to the collision scene.

While at the hospital, officers formed grounds to believe the male driver had been in possession of the firearm and he was arrested. He was later released from medical care and transported to the NRPS Prisoner Management Unit in Niagara Falls.

As a result of the investigation, police say twenty year old Daniel Grant of St. Catharines has been arrested and charged with various criminal offences regarding the firearm including knowingly not holding a license S.

Grant was held in custody in order to attend a video bail hearing at the Robert S. K. Welch Courthouse in St. Catharines on May 9, 2021.

The two passengers of the Honda Civic were both released from medical care without serious injuries.

Damage to the Toyota Tundra was estimated at $5,000.

This incident is still under investigation. Anyone who may have witnessed this incident or have any information are asked to call 905-688-4111, extension 1024233.