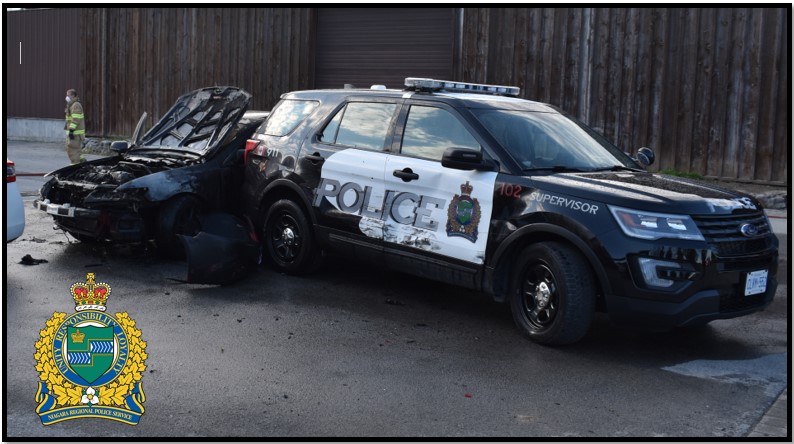 Niagara Regional Police say a man is facing charges after ramming two police cruisers on May 6, 2021.

At approximately 5:40pm officers were called by members of the public regarding a suspicious car in St. Catharines and when they arrived at the scene located at Hillview Street near Tunis, they found a black, 2005, four door, Acura TSX parked at the side of the road with the keys in the ignition.

The male driver and the female passenger were both asleep and exhibiting signs of possible drug use.

The uniformed officer positioned their marked police cruiser behind the Acura and attempted to speak with the driver. The driver spoke with the officer and provided a false name.

As the officer was investigating, the driver suddenly reversed and struck the cruiser. The Acura fled the area at a high rate of speed. Officers briefly pursued the Acura but quickly discontinued the pursuit out of the concern for public safety.

The officer parked their cruiser behind the Acura. The Acura again suddenly reversed striking the cruiser, and then repeatedly rammed the cruiser in an attempt to escape.

When the Acura became inoperable from damage, the officer attempted to arrest the male driver. The driver refused to exit the car or turn it off. He continued to depress the accelerator causing the tires to spin in place which created a large smoke cloud, resulting in the Acura catching on fire.

The male refused to exit the Acura and had to be physically removed and arrested.

No members of the public or officers were injured during this incident, however damage to the first NRPS cruiser is estimated at $2000 and the second cruiser at $10 000 and the Acura was destroyed by fire.

The male driver was transported to a local hospital for assessment. He was later released from medical care and transported to the NRPS Prisoner Management Unit in Niagara Falls.

Thirty three year old Jonathon William Kell of St. Catharines has been arrested and charged with various criminal and provincial offences as a result of the incident and the female passenger was initially arrested and was later released without charges.

Next post St. Catharines Crash Leads to a Firearm and Charges