CANADIAN Among Dead in AMTRAK DISASTER 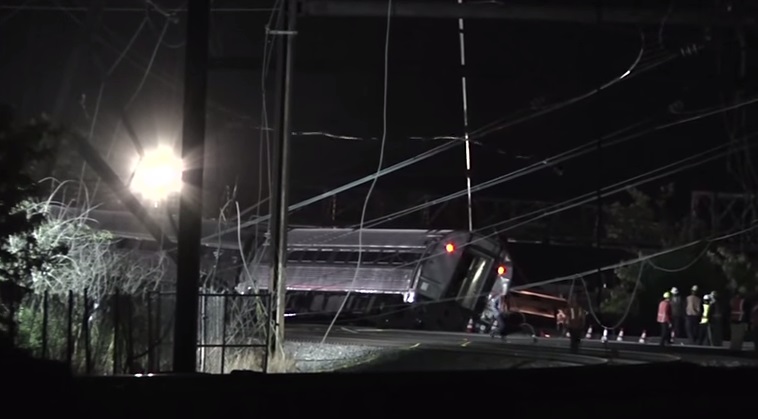 A Canadian  has been identified as one of seven people killed in an Amtrak train derailment in Philadelphia.

Abid Gilani, was a a senior vice-president at the company U.S. financial Services Company Wells Fargo and was among the victims of Tuesday’s crash, which also left more than 200 people injured.

“It is with great sadness that Wells Fargo confirms that Abid Gilani, a valued member of our Commercial Real Estate division, has passed away,” the company said in a statement.

“Our hearts go out to all those impacted by this tragedy.”

A company spokeswoman said Gilani was a married father of two who split his time between Washington and New York. Gilani’s wife told reporters in Rockville, Md., that her husband was a “dear person” and “a kind family man.”

“We have suffered a tremendous loss today,” Diane Gilani said Wednesday. “He’ll be sorely missed … he was really a wonderful person.”

Diane Gilani said she and her husband — both from Canada — moved to the United States “decades ago” but still have family ties in Ontario.

According to his LinkedIn profile, Gilani attended Laurentian University in Sudbury, Ont., and the University of Saskatchewan before working as a mine planning engineer in Saskatoon. He also worked for ScotiaBank and RBC Dominion Securities.

Prior to joining Wells Fargo, he spent about eight years with the Mariott International hotel chain.

The New York Daily News reported that Gilani, 55, was returning to New York from Virginia where he and his mother, who lives in Toronto, had attended his uncle’s funeral when the crash happened.

Six bodies were found at the crash site in total and the seventh died in hospital.  One of the people killed was Midshipman Justin Zemser, 20, on leave from the U.S. Naval Academy in Annapolis, Md., an academy spokesman said.

A video software architect was also among those killed. Jim Gaines, a 48-year-old father of two, had attended meetings in Washington and was returning to his home in Plainsboro, N.J., when the train derailed.

Rachel Jacobs, who was commuting home to New York from her new job as CEO of the Philadelphia educational software startup ApprenNet, leaves behind a husband and two children. She had been unaccounted for after the crash for several hours.

Late Wednesday, officials at Medgar Evers College in Brooklyn confirmed that 42-year-old Derrick Griffith, dean of student affairs and enrolment management, was one of the seven fatalities.

Federal investigators said Wednesday that the Washington-to-New York train was travelling at about 170 kilometres an hour before it ran off the rails along a sharp curve where the speed limit drops to just 80 km/h.

A spokesman for the National Transportation Safety Board said the engineer had applied the emergency brakes moments before the crash but slowed the train to only 164 km/h by the time the locomotive’s black box stopped recording data.

Next post The REAL BULLETS Are The Ones YOU CAN'T SEE