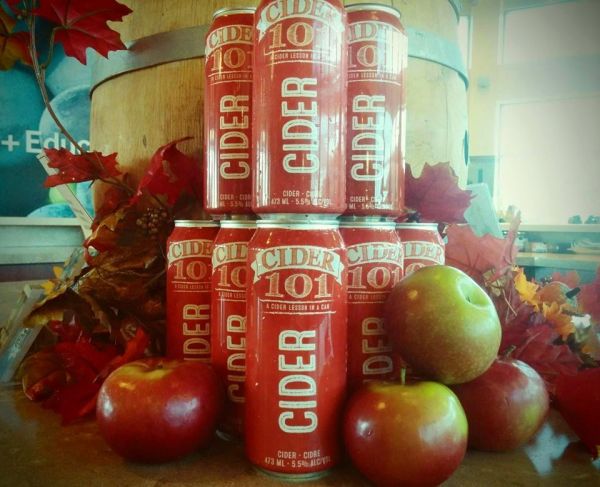 The Niagara College Teaching Winery has launched its first cider. Named Cider 101 – it’s a cider lesson in a can at the teaching winery – the new addition marks a first for the college’s trailblazing Canadian Food and Wine Institute, which is also home of the first commercial teaching winery and teaching brewery in Canada.

“It’s an important step in diversification of our learning at the Canadian Food and Wine Institute,” said CFWI dean Craig Youdale. “Cider is a product on the rise in Ontario and we wanted to get into that part of the fermenting world.”

Gavin Robertson, winemaker at the NC Teaching Winery, noted that as a response to the increasing popularity of hard ciders on the market in Ontario and Canada, a growing number of students have been interested in expanding their knowledge base about fruit wines in general, particularly hard apple ciders.

“It made sense to try our hand at making a commercial cider,” he said, noting that several students from the Winery and Viticulture Technician program were involved in the process.

The apples were harvested and the juice was fermented in 2014 and it was just completed this summer, with the product canned –with the help of the college’s Teaching Brewery – this fall.

“It’s quite dry, especially compared to a lot of the large-scale commercial ciders on the market, and even relative to most craft ciders that are currently available in Ontario, but also has a creamy mouth-feel derived from seven months of yeast lees contact, which works really well with the bubbles from the carbonation,” said Robertson.  “The aromatics are fresh and fruity, with undertones of cinnamon, clove, vanilla and a bit of roasted hazelnut character.”

Cider 101 is available for purchase at the Wine Visitor + Education Centre (at the College’s Niagara-on-the-Lake Campus) at $3.50 per can.

The Canadian Food and Wine Institute, located on Niagara College’s Niagara-on-the-Lake Campus, is the College’s centre for food wine and beer education. In addition to Benchmark Restaurant, it features on-campus learning enterprises including the NC Teaching Winery – Canada’s first and only commercial teaching winery – and the NC Teaching Brewery – also the first of its kind in Canada. The CFWI is also home to the reigning Junior Culinary Team Canada, comprised of students and recent graduates who, in 2013, won the right to represent Canada at international competitions for three years, up to and including the 2016 World Culinary Olympics in Erfurt, Germany.