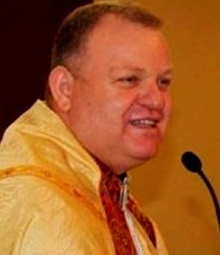 Police have launched an investigation into a Chaldean Catholic priest from London, Ont., after church officials reported more than $500,000 for refugee sponsorship was lost to gambling. Father Amer Saka, a priest working at the St. Joseph Chaldean Catholic Church in London, is under investigation after telling his bishop, Emanuel Shaleta, that funds that were  to help new Canadians had instead vanished in vice, Shaleta said.

Shaleta went on to say: “We believe that Father Saka has a serious gambling problem and that these funds may have been used for that purpose. Since there is an investigation going on, we cannot confirm what he’s saying.”

Shaleta, who sits at the head of Canada’s first and only Chaldean eparchy, or jurisdiction, said he suspended the priest immediately after learning of the money that had gone missing. The bishop then drove to pickup Saka and take him for several days of voluntary treatment at Southdown Institute, a facility north of Toronto for priests battling problems ranging from addiction to depression to sexually abusive behaviour.

About the Chaldean Catholic Church

The Chaldean Catholic Church is based in Baghdad and represents Catholics from Iraq and neighbouring countries, but ultimately falls under the watch of the Holy See in the Vatican.

The Toronto-based Chaldean eparchy is one of the Chaldean Catholic Church’s newest, founded less than five years ago as Iraqi immigrants continued to arrive in Canada. It includes several churches in Ontario, including St. Joseph.

Monsignor Murray Kroetsch, chancellor of the Roman Catholic Diocese of Hamilton, which runs the sponsorship program, said Saka was the leader of a constituent group raising funds to sponsor refugees from Iraq which is one of about 30 parishes and parties to partner with the Hamilton diocese in the sponsorship agreement.

Holders of sponsorship agreements, signed with Immigration, Refugees and Citizenship Canada, must support refugees for at least the first year after their arrival. Sponsorships cost about $6,000 a person, or about $20,000 to $25,000 for a family of four.

Bishop Emanuel Shaleta said he informed parishioners soon after the priest told Shaleta about the missing funds.  London police confirmed they received a complaint Feb. 24 of alleged financial misappropriation related to the local parish and that an investigation is ongoing with no charges laid at this time.

Next post Women, Media, and Politics - Did This Week Really Happen?