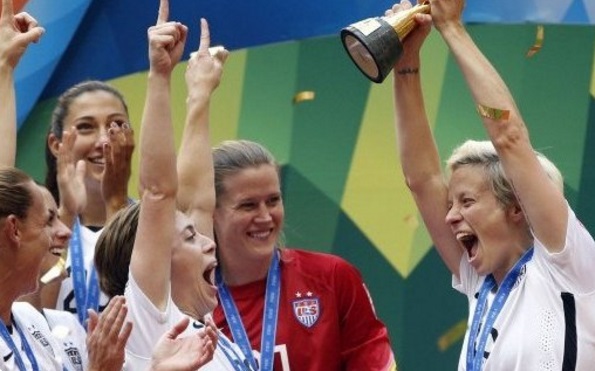 Citing figures from the Federation’s financial report, the suit claims that even though the women’s team generated almost $20 million more in revenue in 2015 than the men’s team, the women earn approximately 25 percent of what their male counterparts make.

Granted, there are fundamental differences in pay structure between the men’s and women’s teams. While the men do not receive a base salary, top players on the women’s team get a salary of around $72,000 a year in return for playing a minimum of 20 games a year. So some of their income is guaranteed.

If they win those games they can, due to bonuses, earn nearly $100,000. The men are also required to play at least 20 games a year, but they can earn up to approximately $260,00 if they win all their games.

But even if the men lose, they still get $5,000 for playing… while the women receive nothing.

Of course there are two sides to the story. You can argue that players on the men’s team are offered higher bonuses as an incentive to participate; traveling to friendlies is at best difficult and at worst highly disruptive to training, recovery, etc.

And you can argue that offering the men more money is necessary because their club salaries tend to be relatively high. For example, imagine you’re Tim Howard, you play for Everton in the English Premier League, and in 2014 your salary was $2.6 million. While the honor of playing for your country is considerable, you may not be super excited about taking a couple of trans-Atlantic flights to play, oh, Trinidad & Tobago in a meaningless friendly.

And here’s possibly the biggest devil’s advocate argument of all: the women agreed to the current deal. (Although their union is involved in a separate legal dispute over the status of that collectively bargained agreement: the Federation claims its contract with the player’s association runs until the end of the year while the union feels the agreement can be terminated at any time.)

So you could argue, as many business owners do, “Hey, when I offered you the job (or in their case, the agreement), you agreed to the salary provided.” And you would be right.

But you would also be wrong. Occasionally, the job market is a seller’s market, but much of the time a new employee is just happy to land a new job. And since many business owners are born cost cutters, it’s natural to want to hire every new employee for as low a wage as possible — possibly even below what you would normally pay an employee to perform that function.

And if you happen to win — and maybe even win big — and manage to hire a great employee for a lot less than you expected to pay, that’s good for your business, right?

In the short term, maybe so.

But then the employment honeymoon wears off — sometimes within days — and the employee realizes you took advantage. Hard feelings ensue, and even if you someday make it right… some of those hard feelings never, ever go away.

The U.S. Soccer Federation knew the players were unhappy. As Hope Solo said, “I’ve been on this team for a decade and a half, and I’ve been through numerous CBA (Collective Bargaining Agreement) negotiations, and honestly, not much has changed. We continue to be told we should be grateful just to have the opportunity to play professional soccer, to get paid for doing it.”

The Federation had a chance to be proactive before things got worse. The same is true for you: if you’re like the employer in my example, paying some employees significantly less money for doing the same (or better) job than others, don’t wait.

Fix it before you’re asked… because if you wait until you are asked, then you’ve waited too long.

Happy, fulfilled, and motivated employees truly make your business — just like employees who feel unappreciated and unfulfilled can break your business.

Next post EMERGENCY CALLED with Massive Suicide Attempts in Attawapiskat

Previous post PUT DOWN THAT FORK! The 10 WORST FOOD TO EAT