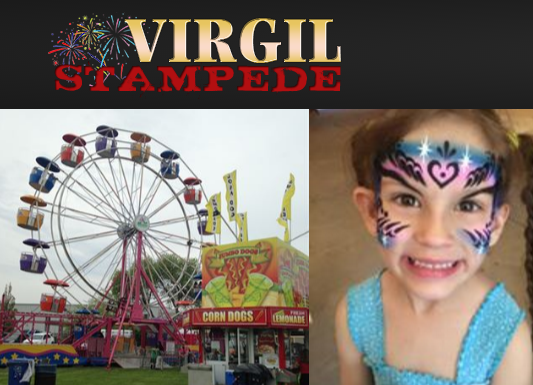 More than 50 years ago, a group of neighbours in Virgil got together to organize fireworks for Victoria Day, as still occurs today in many neighbourhoods. But these families went on step further, providing pony rides for the kids. That celebration on the grounds of the Virgil Public School grew to what has become the Virgil Stampede, with something new added each year — this year, better than ever.

The first open horse show, with competitors coming from around the province, was held in 1965 at the Virgil Sports Park. The next year 75 cents admission was charged. Proceeds went to the Centennial Arena, which was officially opened Victoria Day, May 22, 1967, during the Stampede.

Amusement rides were added in 1968, provided by Robertson Outdoor Amusements until the company was purchased by John Homeniuk, who continues to provide one of the most popular attractions of the Stampede.

In 1969, the Stampede became a two-day event, with horse shows both days, but as those competitors found other events to open their season, new attractions were added to make the Stampede one of the most exciting events in the region celebrating the arrival of warm weather.

There are no longer horse shows, but the amusement and pony rides continue to be popular, and of course there is always great food to be found.

The mud bog run has become one of the best-attended events at the Stampede with ATVs, dirt bikes and small trucks competing.  This year’s event starts at 9:30 am Saturday morning…don’t miss it!