Protestors Gather at Timmie’s in Response to Minimum Wage Controversy 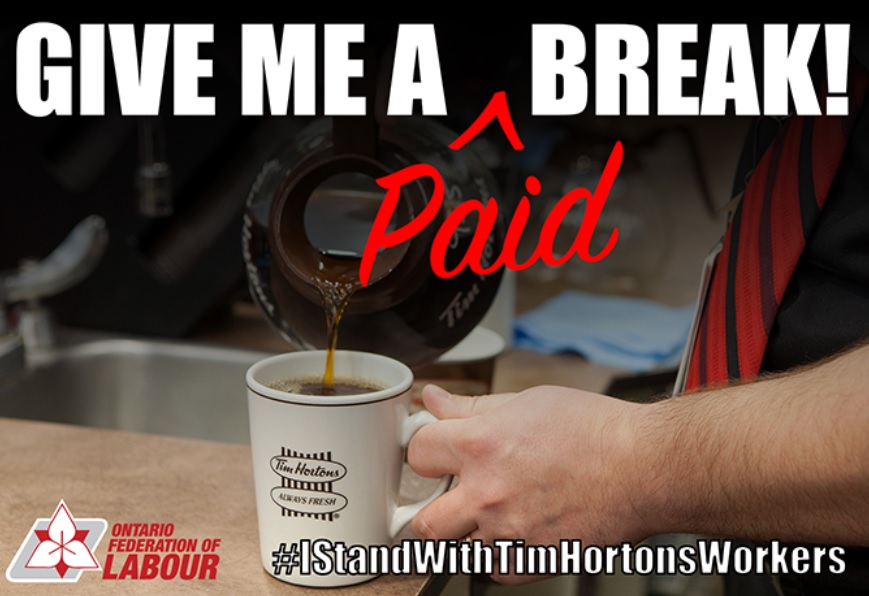 More than a dozen Tim Hortons locations across Ontario are being targeted for protests today in response to reports of how the coffee chain has responded to Ontario’s minimum wage spike.

The  Ontario Federation of Labour (OFL) and the Fight for $15 and Fairness Campaign announced plans for protests at 15 Tim Hortons locations across the province, including nine in Toronto, “to demand that the corporation not roll back workers’ wages and benefits.”

This, after outrage from the public when the story got out that Tim Hortons franchisees in Cobourg, Ont., (who were the kids of chain co-founder Ron Joyce), had cancelled paid breaks for employees, and started requiring them to pay for a portion of their health and dental benefits in response to minimum wage hikes.

Tim Horton’s head office called the franchisees’ actions “reckless” and “completely unacceptable” but the OFL didn’t buy it saying that “this is outrageous coming from a hugely profitable multinational company. The Tim Hortons corporation dictates virtually every detail of the franchise-owner’s business practice. It even stipulates the required net worth (at least $1.5 million) of any potential franchise owner. … It’s clear the parent corporation has the power to fully restore workers’ wages, benefits, and working conditions.”

The OFL and the Fight for $15 Campaign are not the only groups mobilizing in the wake of the Tim Hortons controversy. A boycott movement has broken out under the hashtag #NoTimmiesTuesday, which would see Tim Hortons customers visit independent coffee stores on Tuesdays, in protest over the franchisees’ moves.

It should be noted that there are lots of other businesses under the spotlight for not reacting properly to the minimum wage hike.  So much so that a hotline set up by the Ottawa District Labour Council received complaints about several dozen businesses within the first three days it was operational.

The council says some of these complaints even alleged that some employers had failed to pay the new higher wage. The province’s labour ministry says it is investigating allegations of businesses breaking the new labour law.