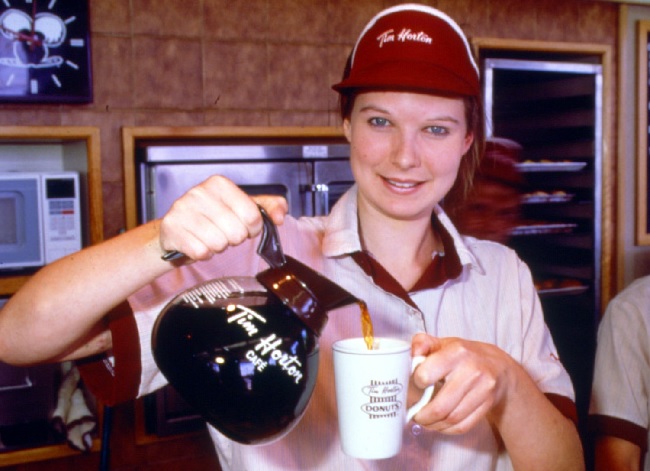 About 50 demonstrations are happening across Canada today as protesters gather to support workers of Tim Hortons.  About 18 of the rallies are in the Toronto area, but others are planned in cities and towns including Niagara- on- the- Lake.

This is in response to the report that some Ontario Tim Hortons franchisees had slashed workers’ benefits and breaks after the province raised its minimum wage.  Jeri Horton-Joyce and Ron Joyce Jr., the children of the brand’s billionaire co-founders, rolled out the controversial measures at two Cobourg, Ont., locations they own.

Organizers behind the protest campaign, dubbed Fight for $15 and Fairness, say the demonstrations planned at specific Tim Hortons franchises today are not about the franchise owners themselves, but rather to pressure their parent company.

Said a spokesperson: “This is about the multi-billion dollar corporation and its parent company, Restaurant Brands International, who have the means to protect workers, but aren’t doing it.”

Friday’s planned national protests follow similar demonstrations earlier this month at 16 Tim Hortons restaurants in Ontario, organized in response to a few franchises that clawed back workers benefits, paid breaks and other perks as a result of the minimum wage increase in Ontario from an $11.60 hourly rate to $14 at the start of the month.

More On the Controversy

Finger pointing between the company and franchisees over who bears responsibility for the cuts has increased and there have been several lawsuits filed against each other in recent months.

Tim Hortons has said individual franchisees are responsible for setting employee wages and benefits, while complying with applicable laws. But some franchisees argue the corporation, which controls prices, should help owners grappling with the mandated wage hike by allowing them to raise prices. The franchisees want a 10 per cent price hike across the board, according to a source.

The Great White North Franchisee Association, which represents half of Canadian Tim Hortons franchisees, has said Ontario’s minimum wage hike and other changes to the province’s labour laws will cost the average franchisee $243,889 a year.

Tim Hortons has said the employee benefit cutbacks made by some franchises in Ontario “do not reflect the values of our brand, the views of our company, or the views of the overwhelming majority” of restaurant owners.