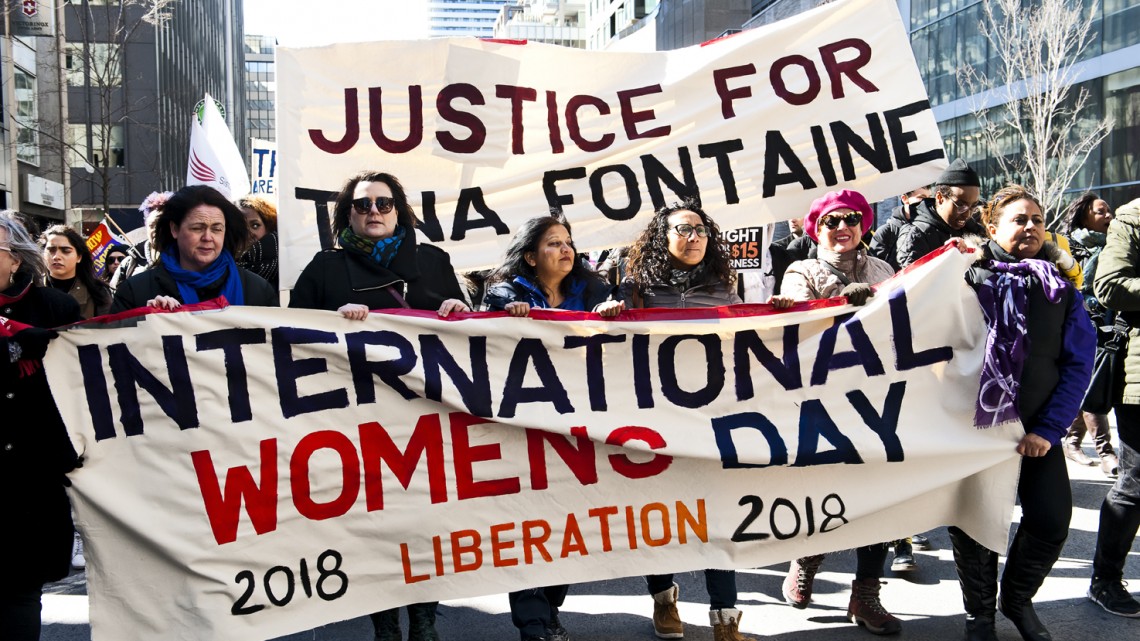 Thousands gathered yesterday in Toronto at Nathan Phillips Square in a “Justice For Tina Fontaine” rally just before International Women’s Day which will take place March 8.

Below, native women lead the parade with with drumming, accompanied by a respected elder in the community. They were joined by the International Women’s Day Toronto March, which is made up of a coalition of groups that organize around women’s issues.

It was only over a week ago that a jury acquitted Raymond Cormier, 56, of the second-degree murder of 15 year old Tina Fontaine and the crowd that included women and men demanded justice for Fontaine and others like her.

The theme of International Women’s Day Toronto was: liberation, honouring our sisters, celebrating our victories, and strengthening our resistance on indigineous land.

Below, a woman leading the crowd  shouts for freedom, equality and peace. A lineup of speakers (most Indigenous women) all had a similar message: Fontaine was failed not just by a criminal justice system that did not secure a conviction in her case, but by every other institution she came in contact with in her short life.

Below, a native woman speaking at the Tina Fontaine rally in an emotional speech. Even before Fontaine was pulled from Winnipeg’s Red River in 2014, her body wrapped in a blanket that had been weighed down by rocks, she was supposed to be in the care of Manitoba’s Child and Family Services where she was put in a hotel room with little monitoring.

When she disappeared, social workers did not tell her family back home. During the time she was reported missing, police came across her in a car with an older man and did nothing.

Below,  a close up of a few of the drummers involved in the march… “No more stolen children, no more children are going to leave our community … and be put in hotel rooms,” Suzanne Smoke of the American Indian Movement told the crowd. Posters and banners in the crowd read “never again” and “without justice there can be no peace of reconciliation.”

Below, a young native girl does a ritual dance at the end of the rally. Its reported that Fontaine’s death was a key factor in convincing the Trudeau government to set up a national inquiry into Missing and Murdered Indigenous Women and Girls.

Below, two women pose in front of a flag that reinforces the message of the day. “We’re marching to honour the ongoing resilience and resistance of all women, celebrate the achievements made in the past as well as the ones to come,” said Anna Liu one of the members of the organizing committee “But while we celebrate and recognize progress made through resistance, our march ends with an important solidarity action to address the ongoing injustice of Canada’s so-called justice system.”

Next post Crash in St. Catharines Sends Man to Hospital