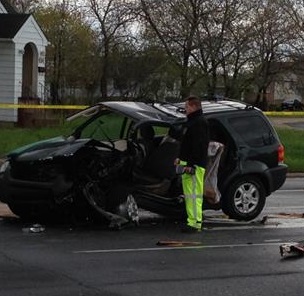 A head on crash in St. Catharines has shut down a part of Ontario street and Police are asking drivers to find an alternate route.

At 1:30am in the morning, police say the two cars crashed and a 54 year old woman had to be cut out of the car and rushed to hospital with life threatening injuries. Another passenger in the car, a 55 year old woman was treated at the scene of the collision.

The driver of the second car, a 40 year old man was taken to hospital and then arrested and charged with impaired driving.

Ontario street is closed from Cecil to the QEW ramp overpass on the south side as Police continue to investigate.

Drivers can get on the Niagara bound QEW but not the Toronto bound ramp.

That stretch is expected to remain closed off until early afternoon.

Next post Stuff to Do in Niagara this Weekend...

Previous post Why I think Kelly Ripa Is Right